This post by Peter Skillen was originally posted on The Construction Zone on May 9th, 2011.

I understand the intent of these kinds of statements. I believe they arise from the focusing on the skills required to use the tool rather than on the ‘subject-matter’ at hand.

I appreciate that Dean Shareski, @shareski , has written about this issueas well.

Sometimes, one feels very alone having these thoughts – and it is a risk putting them out there whenever the predominant culture – especially, forgive me, Twitter culture is cascading and retweeting these one-line ‘wisdoms’ such as the one that starts this post. (In fact, it is bizarre that Dean used almost the same language as I did in his post. “I understand…” and “It is dangerous”. I started this post without any previous conversation with Dean about this issue.)

There are two main points to be made here.

Media with which to think

Firstly, Salomon suggested that computers can be ‘cognitive partners’ – that they can be leveraged like ‘power tools for the mind’ in the same way that traditional power tools extend our physical capabilities.

The modification of this stance which fascinates me is not just the quantitative amplification of the ‘tool’, but the ‘qualitative’.

Computers are not mere tools but are media with which to think.

For many years I have suggested that computers are not mere tools but are media with which to think. They can provide mental models that are transferable within, and across, domains. In, Deep Understanding – the Issue of Transfer, I outline some practical suggestions of this. Again, Gavriel Salomon’s work on the ‘effects with’ versus the ‘effects of’ technology influenced me greatly.

‘Effects with’ are the changes that take place while one is engaged in intellectual partnership with peers or with a computer tool, as, for example, is the case with the changed quality of problem solving that takes place when individuals work together in a team. On the other hand, ‘effects of’ are those more lasting changes that take place as a consequence of the intellectual partnership, as when computer-enhanced collaboration teaches students to ask more exact and explicit questions even when not using that system.

This is evidenced in many domains of life and is showing up in a lot of the literature in recent years – in fact, for centuries.

In The Drip Effects of Technology I described what Gavriel Salomon said regarding the first- and second-order effects of technologies – “it is quite likely that in the long run education will be affected by the unintended, drip-like effects of computing, particularly the Internet and computer mediated communication“. (Montreal, June 28, 2000)

Anthony Aguirre, in The Enemy of Insight, suggests that “information input from the Internet is simply too fast, leaving little mental space or time to process that information, fit it into existing schema, and think through the implications”. (From Is the Internet Changing the Way You Think? Edited by John Brockman)

Max Tegmark says in The Cat is out of the Bag, “Important issues fade from focus fast, and while many of humanity’s challenges get more complicated, society’s ability to pay attention to complex arguments dwindles. Sound bites and attack ads work well when the world has attention deficit disorder.”(From Is the Internet Changing the Way You Think? Edited by John Brockman)

In Blue dye plus water? Or blue water?, I briefly recounted Derrick de Kerckhove’s analysis of what happens to society when new media are invented. (I repeat here.) In The Skin of Culture he says, “The addition of a drop of blue dye to a glass of water results not in blue dye plus water, but in blue water: a new reality.” De Kerckhove indicates that McLuhan(his mentor) and others pointed out that “the inculcation of the habit of literacy results not in a pre-literate world plus readers, but in a literate world: a new world in which everything is seen through the eyes of literacy”.

When will we see that we have successfully integrated Information and Communications Technologies (ICT) into the lives of students? It seems to me that this will be achieved when we see them not simply using ICT as ‘tools’, but rather when we see students thinking differently as a result of their ubiquitous presence and facility. The invention of words, and subsequently the printing press, resulted in a new literacy because people now had words with which to think and to communicate. ‘Blue water’ with respect to ICT means that people must sufficiently appropriate these technologies in order that they become ‘media with which to think and to communicate’.

‘Gutenberg Parenthesis’ is history, but history repeats itself

So although we are outside of the “Gutenberg Parenthesis”, we are perhaps into another era where there are many parallels. Technologies are not simply tools.

••If you would like to see an interactive version of the graphic, please use the links below. 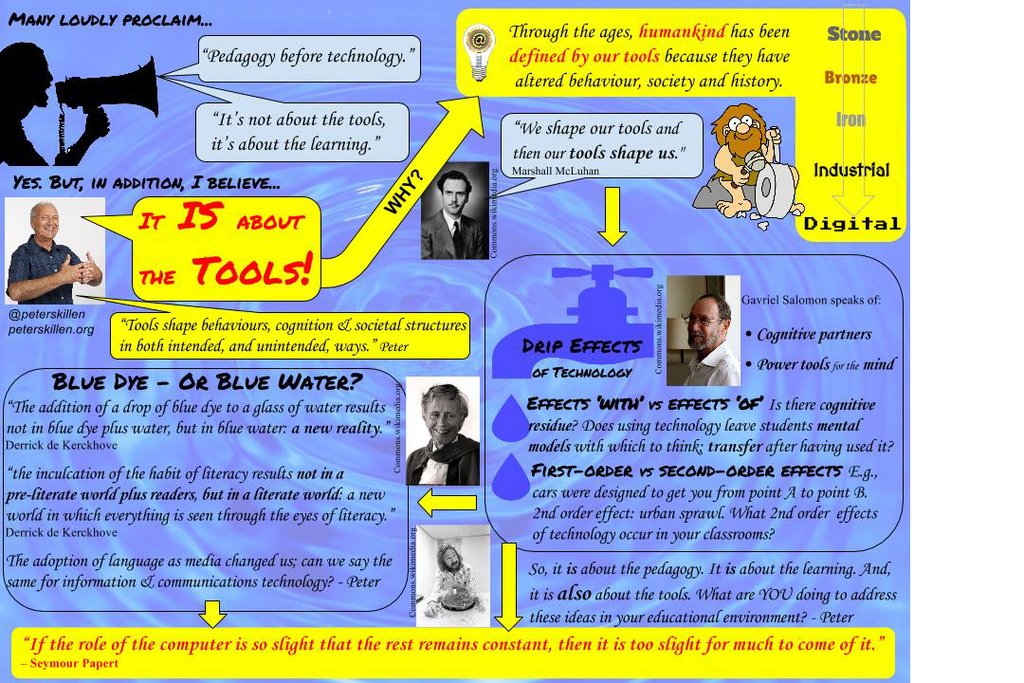 Featured Blogger: Peter Skillen So You Want Kids to Code! Why?